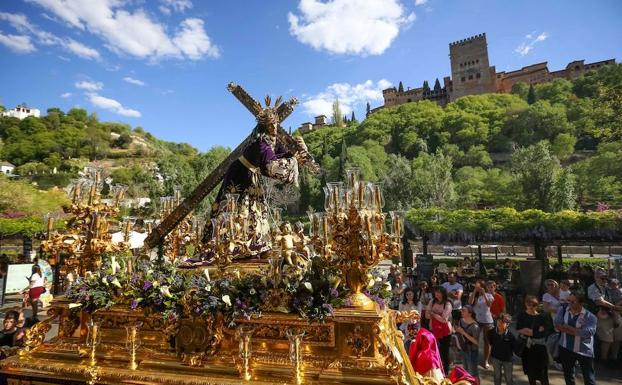 Holy Week in Granada, an entire exhibition of Andalusian sentiment with the sign of a city like Granada

The Zaidín, the Albaicín or the Realejo next to the historical center of the city see images and processions of great beauty being processed and with the sole objective of reaching the visitor, the spectator, the message of Christ Crucified, Dead and Risen.
The Holy Week in Granada is one of the most deeply-rooted traditions in the city, with a large number of visitors who are dazzled by the solemnity of the brotherhoods with their brotherhoods who make their processional departure from Palm Sunday to Easter Sunday.
The Mystery, the Three Falls, the Holy Supper, the Garden of Olives, the Christ of Forgiveness, the Judgment, the Christ of Work, the Holy Thrown or the Dispossessed, Christ as the Sacred Protector of the city, the Christ of the Silence, Favors, Expiration, Captivity, the Rescue and the Risen Christ, are the most significant example of a Holy Week that dazzles on its streets by day and by night.

In addition to carvings and thrones, another hallmark of Granada’s Holy Week are the streets through which it passes. The Cathedral is the center of the religious part and during the itineraries you can see and explore wonderful surroundings such as the Albaicín, the Paseo de los Tristes, the Carrera del Darro and even the Alhambra.

Internationally known are the processions of the Gypsies, with the rise to the Sacromonte of the images between arrows and bonfires; that of Silence, in which the public lighting of the streets through which it passes is turned off; and that of the Alhambra, with its tour of the Nasrid monument and the passage through the well-known Puerta de la Justicia

In addition, the Holy Week in Granada has a unique celebration: the prayer at three o’clock on Good Friday, the Ninth Hour, in the Campo del Príncipe, where the death of Christ is remembered before the stony image of the Christ of Favors .